A few weeks ago Sara and I went to Big Bear Lake, California for the Crafts n Cranks Enduro.

Here is a timeline recap of our adventure (times approximate and merely noted for a general reference):

11pm Upon opening the car door, think we took a wrong turn and ended up in Texas. Or Louisiana. Or one of those god awful humidity stricken states. It’s 86 degrees.

12pm-6am Sleep didn’t happen. I laid completely still in the back of my SUV to avoid any movements that may result in a sheen of sweat over my entire body.

11am Snow Summit is fun! Meet up with one of our racers, Donna, from Arizona. This is her first Enduro. In addition, Nicole from Mike’s Bikes who I met at the Toro Enduro was meeting up with us. We have a blast getting in practice runs. 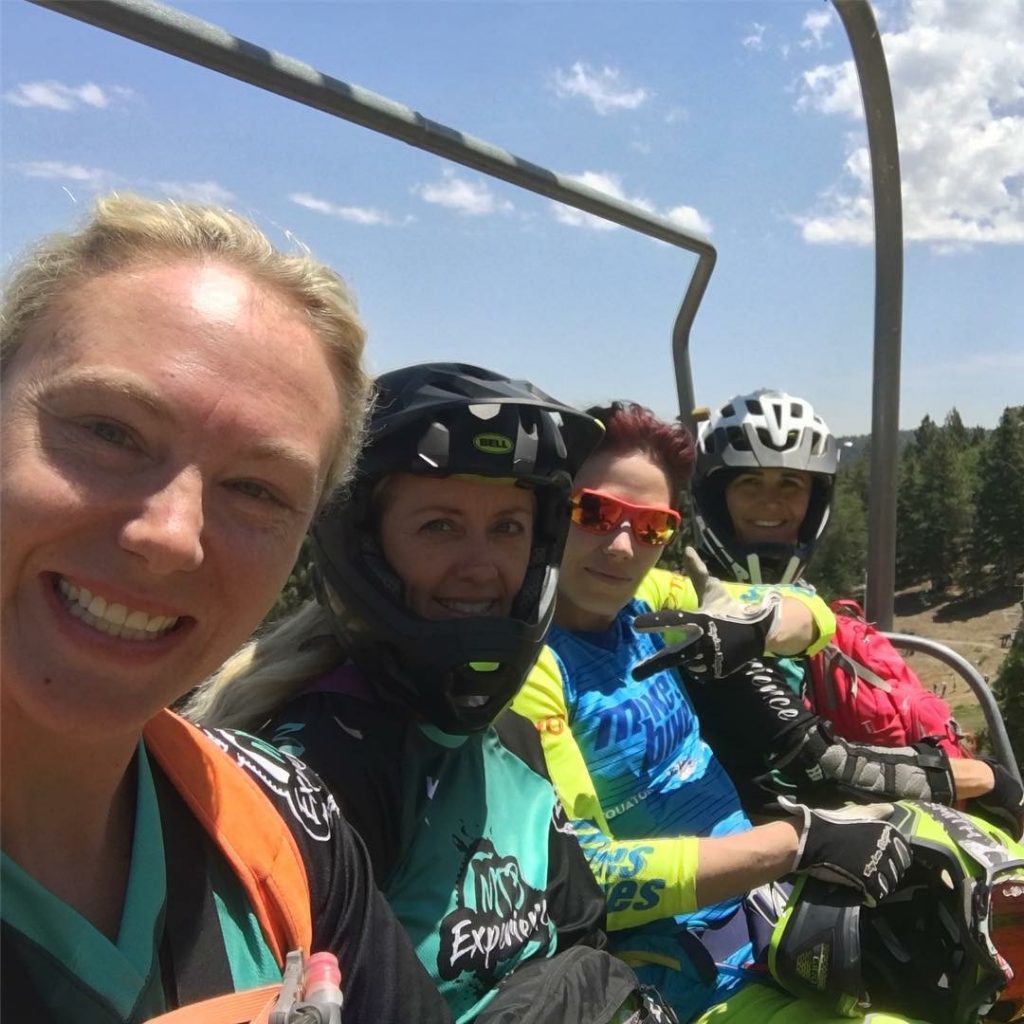 4pm Head to our campground where I manage to piss off the campground workers by almost running over one that walked in front of my car.

11am Stage 5 practice run. Forget to put on elbow pads.

11:05am Crash. Like hit a hidden rock in the deep dust and fly over the bars crash. Immediately leap up, jump on my bike, fix my askew brake and keep on trucking before anyone came up behind me. We finished out and I looked down to see my knee pad ripped and dangling from my leg. I took survey of my elbow and had a nice gash right where a pad would have been. All wounds including my face were covered in a massive amount of dirt. Decide to hit the medic tent to get everything cleaned up and wrapped before shoving them in my spare pair of dirty DH pads.

12pm The first aid people tell me to go into the bathroom and clean up my wounds. I manage to get some dirt off despite wanting to scream oh sweet baby Jesus from the stinging hydrogen peroxide.

12:18pm Sara comes in from the first heat. She qualifies for the next one. I take her pic while she has a coughing fit. 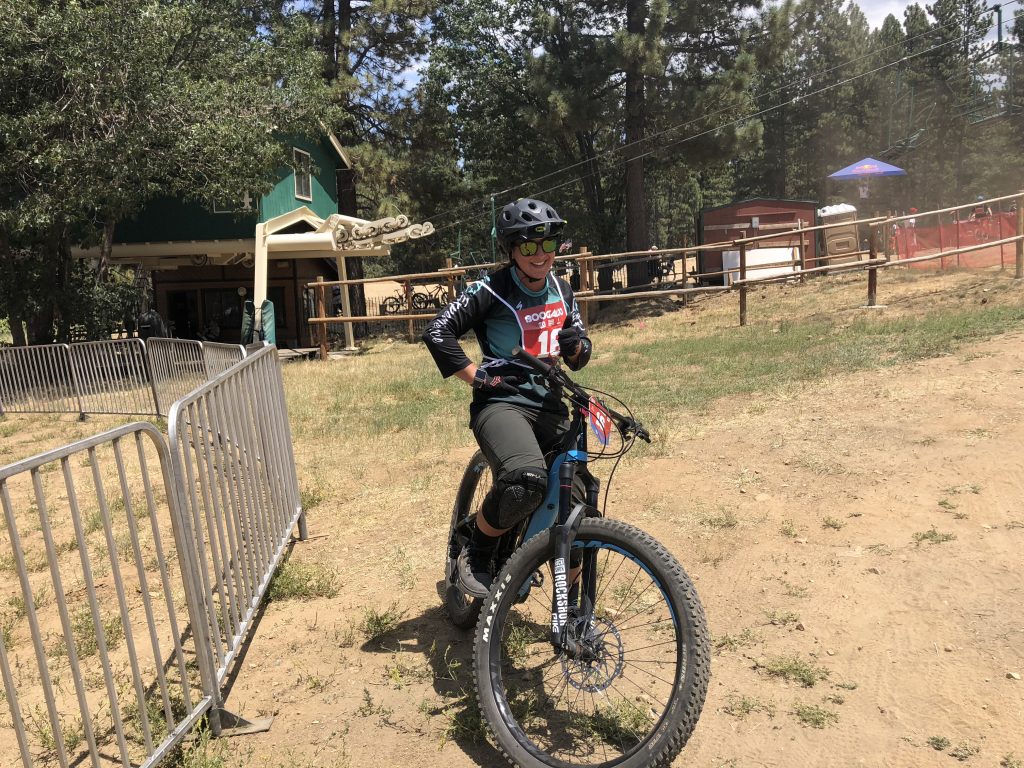 12:20pm Sara states she can’t breathe well and heads off to the first aid office. She ends up getting oxygen. Good start to day 1 of the race. 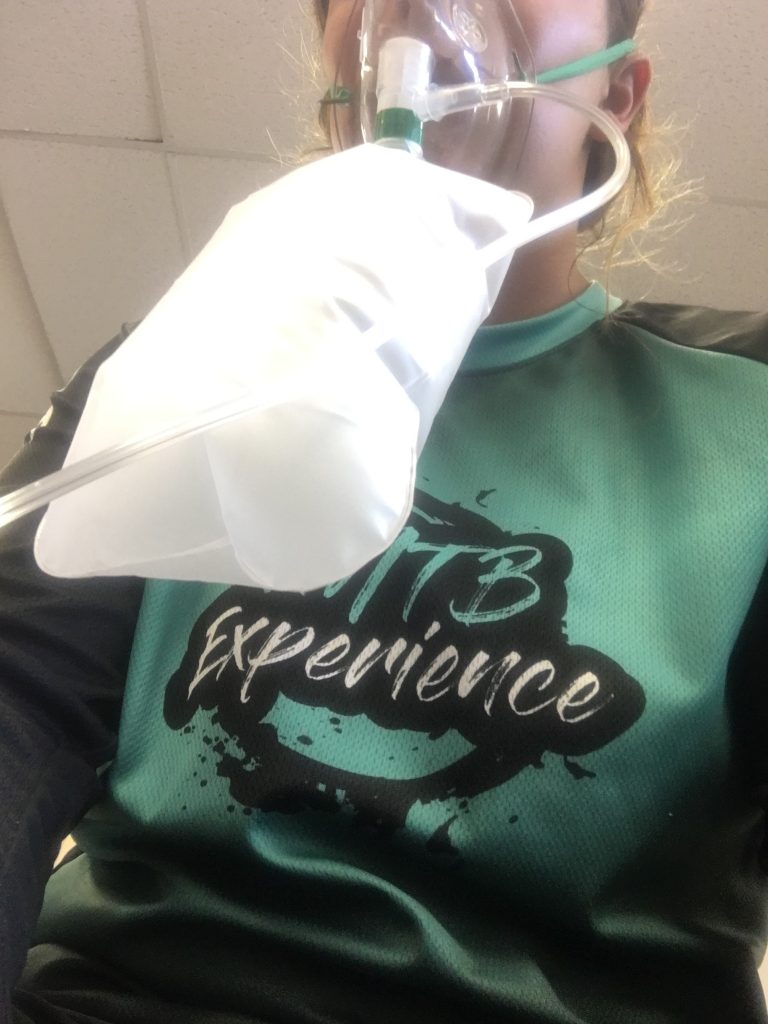 4:00pm Start of stage 1 of Enduro. We end up sitting for awhile and I manage to make friends with two lone ladies who were racing. I love including everyone. It’s like making sure no one eats lunch alone. If I see someone by themselves I immediately talk to them and invite them to hang out with us. It can be nerve wracking racing on your own. I don’t care if they are my competition, let’s support each other.

5:30pm Actual stage 1 start of Enduro. I get to meet Holly Cass who is a rad racer mom on my social media. She is just as amazing in person as she is online. She is in my category and I loved being able to sit and chat with her at the starts.

6:15pm – 7:15pm I died. Like really. I am pretty sure that was purgatory where I just climbed up a relentless uphill FOREVER. It was horrible. I asked another rider after about 45 minutes if it was much longer. He did the, “Um, well…” which means WE AIN’T CLOSE. I think he saw the look on my face of I am going to have a complete meltdown. Like a girly boohoo cry right here on the side of a mountain. He immediately started chatting and we got through the rest of that hell together. I couldn’t thank him enough. He assured me it was both of us that got us through that one.

7:15pm Start of stage 2. It was just me and a few guys at the start. I kept trying to get them to go so I could go behind them and not get caught. One of the ladies at the timing tent called me over and said, “Ok Jeni. You are going to go. Then I am going to go to the bathroom so no one will be able to go for a few minutes.” I LOVE HER. I thanked her profusely and told her, “Take your time in there!” It was so nice to race a stage without the worry of the men catching me. However I didn’t account for the sun going down and being completely blinded on certain parts of the run. Not to mention at race speed.

7:20pm Go back to the car to discover Sara already done and upset. Apparently she had gone off course on stage 1 and ended up on stage 3. They taped a section of stage 1 that wasn’t there during practice. Not knowing the trails we had been hitting a left line on a rocky section that they taped off. There was an out on this particular section to go onto a blue trail. The tape had come down and was laying across that out. When I hit it, I was confused and wasn’t sure which way was correct either. I managed to take the correct way. I heard from others they almost OTB’ed at that section trying to avoid the new tape on the left. Sara immediately went over to the timing officials and was told there wasn’t anything they can do. They gave her the time it was at that exact moment versus a DNF. However she was racing in the Pro category so there was no way of making that amount of time up. She was devastated.

9:00pm Curse in the camp shower trying to clean out my wounds while pushing a button receiving 5 seconds of water at a time.

9:30pm Sara and I sit in the car trying to wrap my knee and elbow with a hodge podge of bandages from my poorly packed first aid kit. 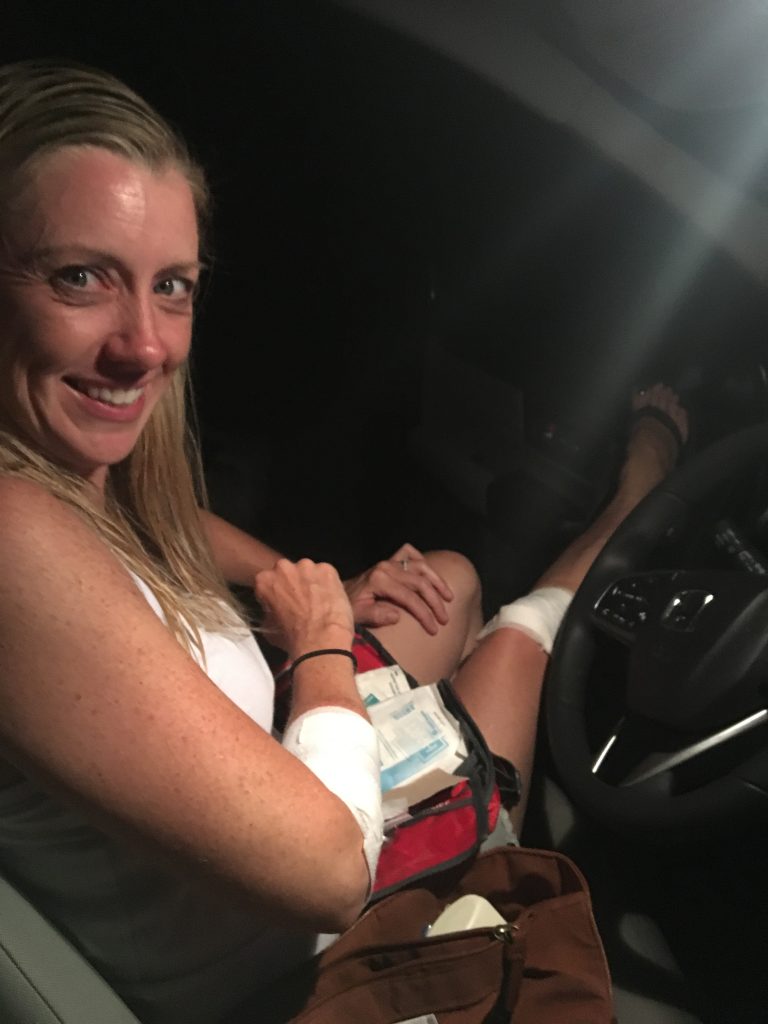 7am Back to climbing the same climb again. It still sucked but was better than the night before.

9:07am As I drop into stage 3 the tape is across the trail to the right. I assume I go to the left. To my horror I realize that is wrong. I screamed SHIT! SHIT! as I hastily re-routed. I was gutted. I could not spare that time. Unfortunately my run got worse. An Expert category male rider had showed up quite late to the stage 3 start. He was put behind us girls. We begged the timing official to move him in front of us but he assured us it would be fine. He would give us a few minutes gap. Unbeknownst to me he didn’t. He caught me but luckily it was on a double track section so no big deal. However as soon as we caught up to a girl in the tight berms, he crashed. Across the berm. I had to stop to avoid a pile up. He jumps up and keeps going. THEN CRASHES AGAIN. At that point, I am like sorry bro and rode around him. The poor guy apologized profusely when we finished. All I could think is, well I am done for. There is no way I can make up all that time.

11am As we waited to start stage 4 another rider asked me how my race was going. I told him what happened and he said, “Don’t give up. You never know what can happen.” Knowing the last 2 stages were pedally, I didn’t have much confidence of making up time. However I thought about it and rode that stage like it mattered.

12:00pm After another heinous climb it was time for the last stage. The timing official yelled at us to get going and not sit around. That we were holding up awards (this was not true being that those awards didn’t start until 2:45pm but we didn’t know that at the time). We decided to line up and apparently a group of teenage boys decided to as well right when we took off. One caught me on a fire road which was great since I didn’t have to slow down. As I pedaled through this long stage, my lungs were on fire and my heart rate was through the roof. I did the drool test where if I didn’t have drool coming out and could breathe I pedaled harder. As I rounded the home stretch and the finish line was only a few pedal strokes away I hear, “Excuse me.” One of those teenage boys was behind me. Are you kidding me? We can see the finish line and me pulling over with 2 pedal strokes left is going to kill my stage and not give you the win.

I won by 3 seconds. I couldn’t believe it.

The MTB Experience race team did fantastic with Beginners – Donna getting 4th place and Michelle Grady 3rd and Pros- Sara 6th place and Heidi 3rd. Sara actually almost made up that 3 minutes she was behind. It was quite impressive. Nicole got 2nd place in Sport 35+ and Holly got 3rd. 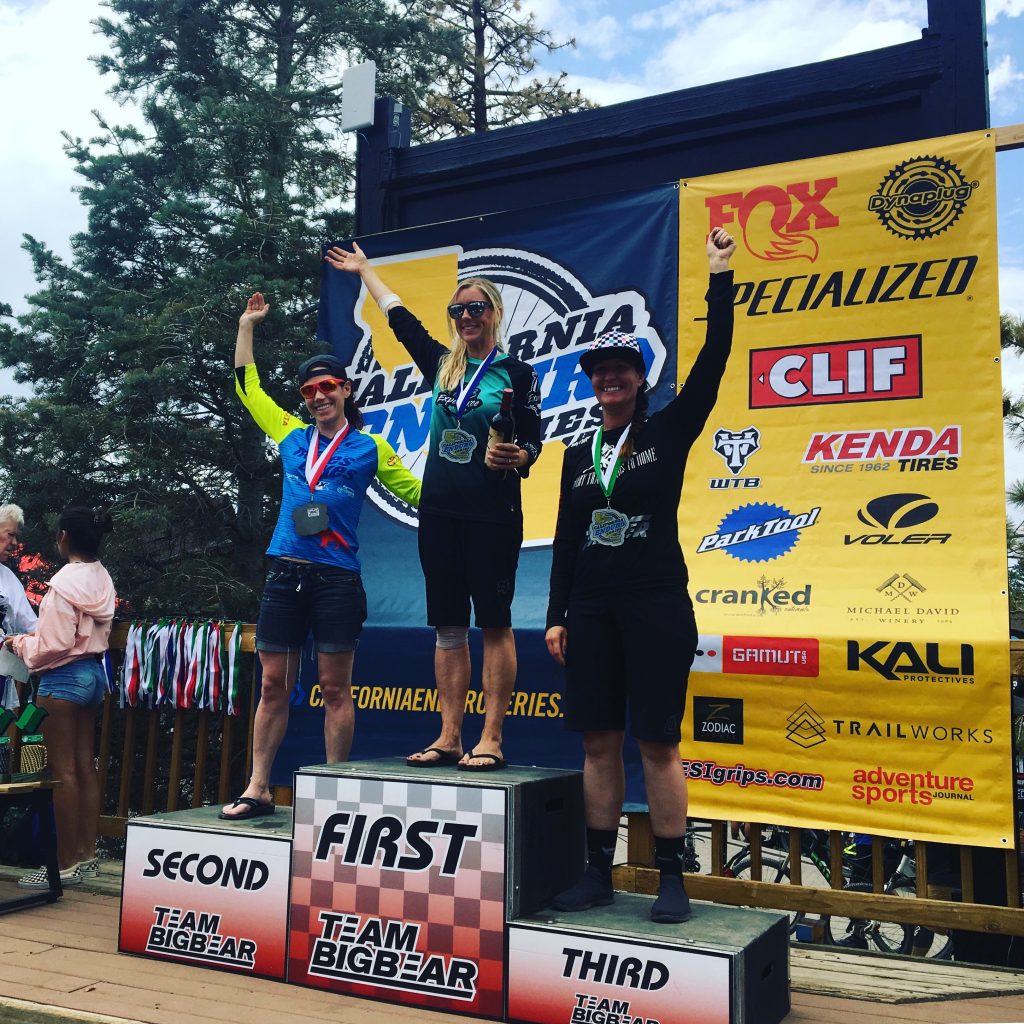 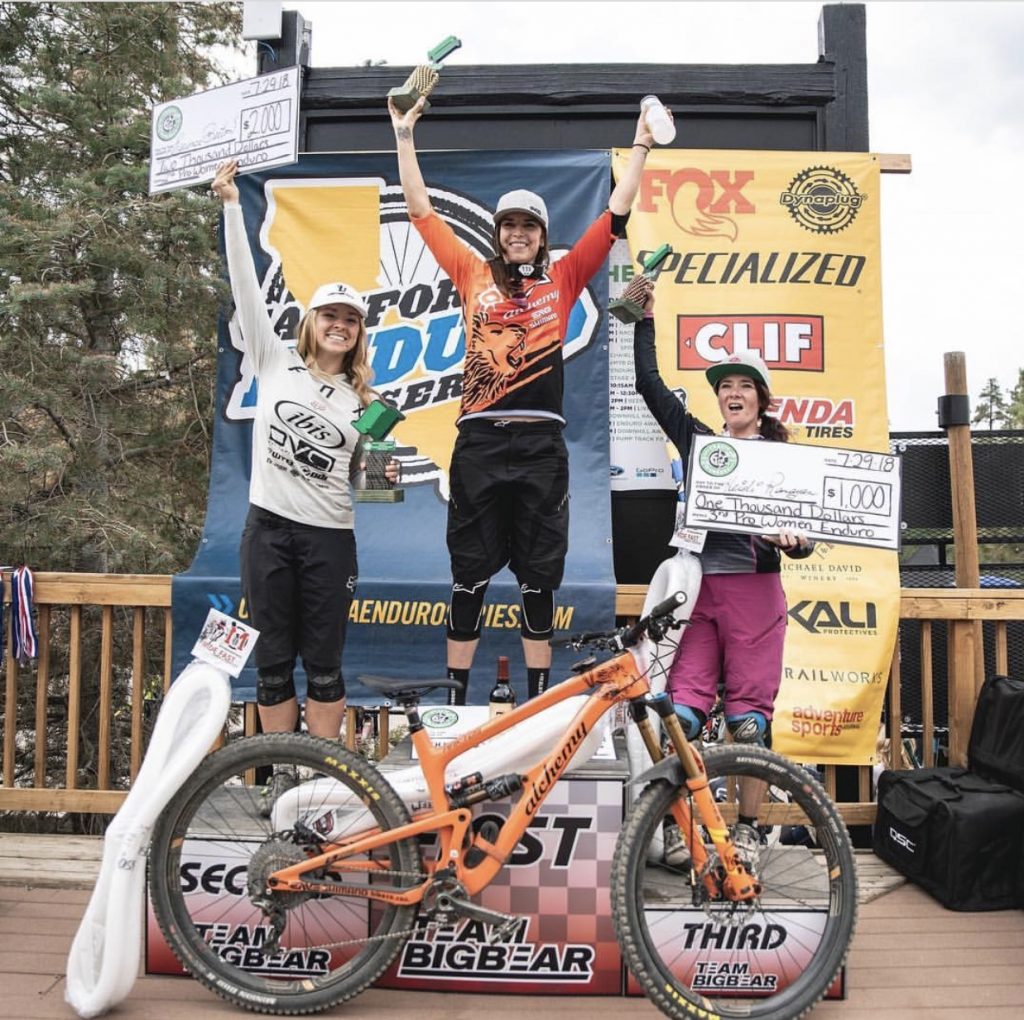 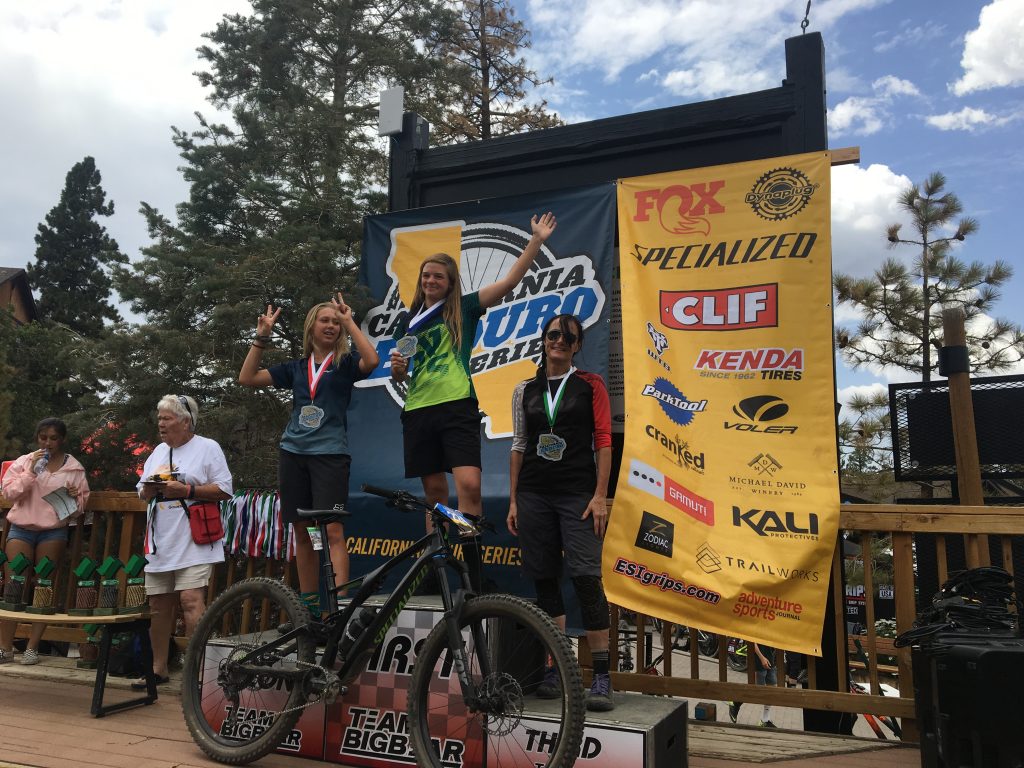 3pm-12pm Drove home to get up and work the next day. MTB Girls are tough mother fuckers.

12pm Discover my wounds are infected. 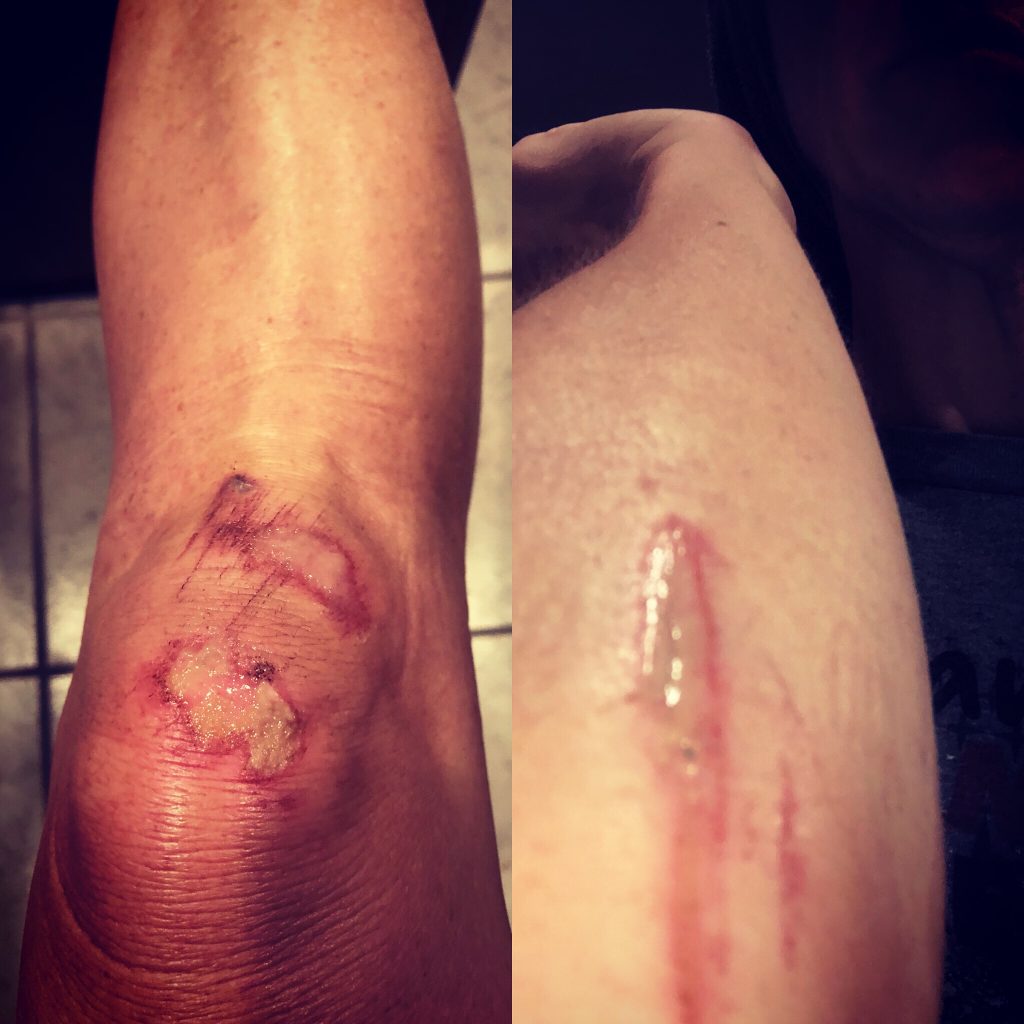 We missed pics of all the categories but congrats to all the ladies that raced Big Bear!! Riding, camping and racing- best MTB girl weekend ever!