Last year the Kamikaze games ate me up and spit me out. It was my first time racing at Mammoth. I had altitude sickness, raced blind and pretty much crashed my way to the finish line.

This year I had our amazing enduro team along for the ride. One of our coaches Heidi has worked at Mammoth mountain for many years. She was there during practice to point out the fast lines. In addition when Kim first approached me about doing a team, I told her I would if she did Mammoth. I gleefully welcomed her to Mammoth to suffer in the kitty litter with the rest of us. 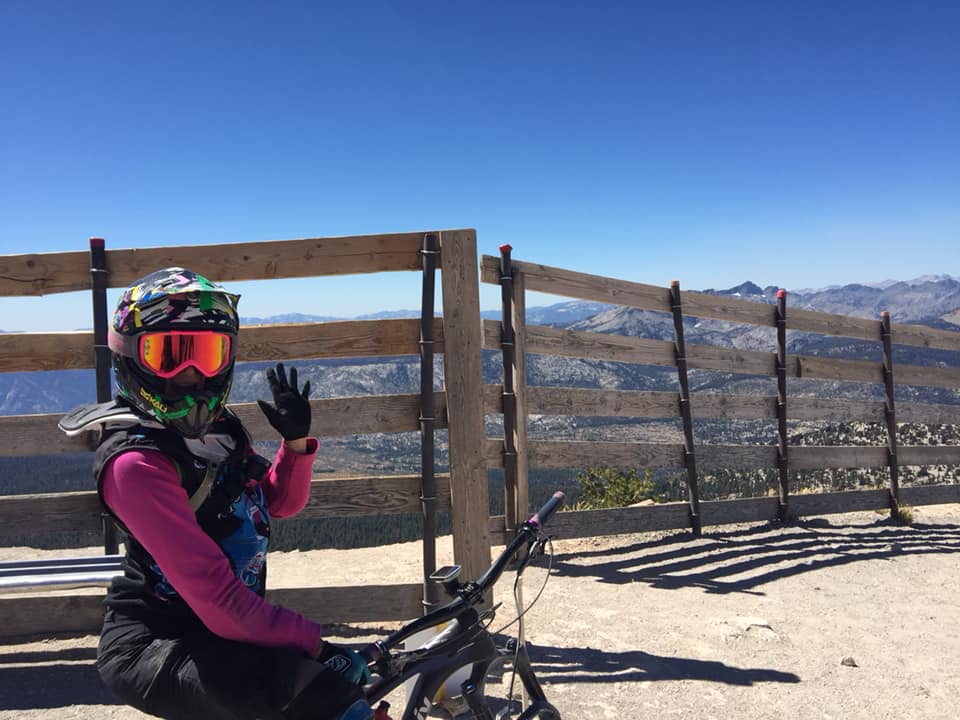 One of my practice highlights was riding the shuttle bus from one side of the mountain to the other with Aaron Gwin. He sat with our group and after a minute caught my eye like he was going to strike up conversation. Well right at that moment, someone asked me where Justin was. WHO CARES. CAN A GIRL GET ONE SHUTTLE RIDE WITH AARON GWIN. The ‘where’s Justin’ conversation turned into a few minutes of all about Justin in which Aaron quickly lost interest and went back to his phone. I need new wingmen.

Unfortunately during practice, Michelle Grady our always smiling race team member, took a nasty spill. I wasn’t there but my heart sank when I got the text she was taken via ambulance to the nearest hospital. She didn’t just take a spill. She fractured her spine, broke two ribs in half, fractured other ribs and had a deflated lung. It was an emotional day as we all waited to hear how she was doing. When I saw her in the hospital, laid flat on a gurney, tubes running out of her nose, she said, “I think I can still get 3rd overall without racing.” Um, ok because that is important. Then she further validated her hardcore MTB status with an update that her bike was okay.

Ah, nothing says let’s race Mammoth than a quick change in weather for race day. The temps were in the 30s with 50mph winds at the top of the mountain. I really enjoyed trying to fly down the infamous Kamikaze that is the worst fire road in the world with corners that make you hang on for dear life as you try not to die going through them. Add the wind and you got yourself a pretty good time. 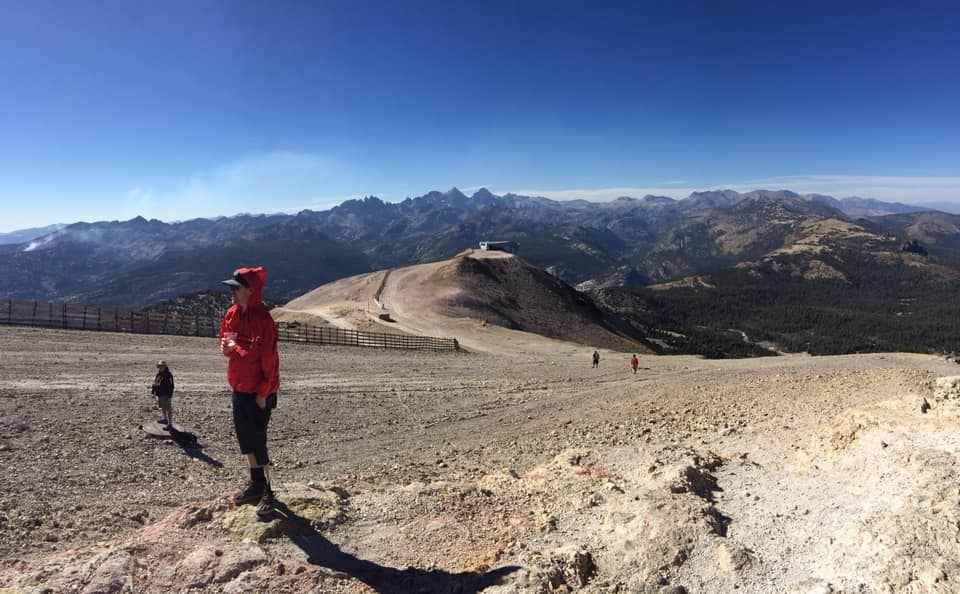 Start of Kamikaze. Why. Just why.

One of the stages started on the left side of the top of the mountain. So, this was pretty much Red Bull Rampage. It was so windy the timing officials were hiding in a truck, counting us down through the camper shell window. Before I was about to go, one of the guys said, “When you start pedaling you need to veer right. The wind has been picking up riders and throwing them into the trail sign on the left.” I barely had time to process that gem before I heard my go.

It was actually a switchback a little way from the top where I thought I was going to meet my maker. I could feel my bike getting sucked towards the cliff. As soon as I realized I was not in control and was in danger of being blown off the side of the mountain, I flung my body as hard as I could to the opposing side. I hunkered down against the gusty wind and ran with my bike to get going again. I heard from another rider the same thing happened to her and she almost peed her pants it scared her so bad.

I was bummed that in practice I missed part of the course marking for that stage. I ended up racing a portion blind which is never fun at Mammoth. However I was happy to ride all of Follow Me which is a double black trail in this stage. Last year I ran and cried my way down it. 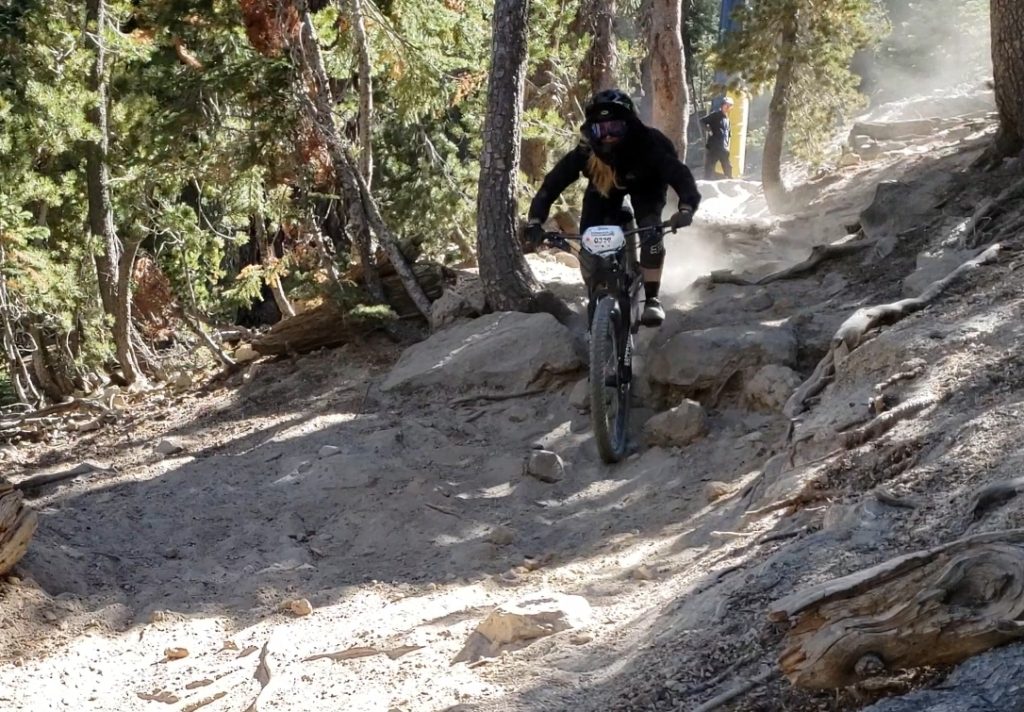 Jeni coming down Follow Me. This pic makes it look flat. IT IS NOT.

The stages were loose, technical, fun and long. Our team did great with all members racing making the podium! 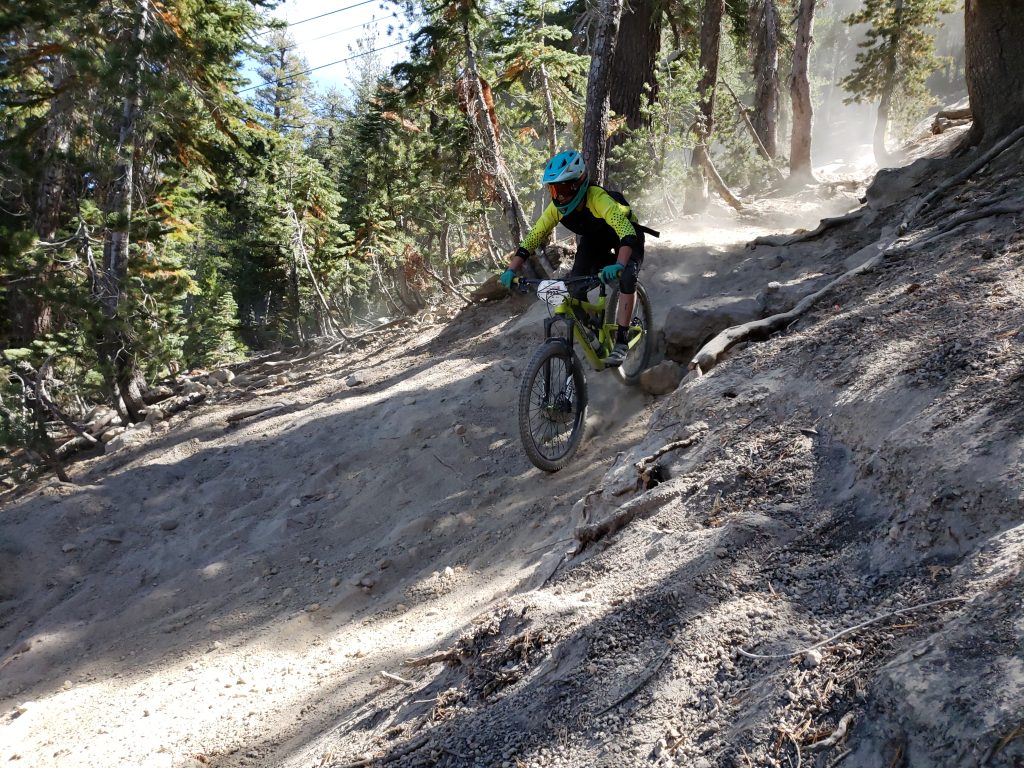 However the scariest feature and biggest gamble of the weekend was the GONDOLA. That damn thing. I had the fortune of being on it when it stopped not once but 4 TIMES over the steepest part of the ride up to the top of the mountain. Oh, at about 10,500ft. It doesn’t just come to a tranquil slow stop. It swings violently side to side like a carnival ride in purgatory nightmare before stopping. The first time it happened I was with Justin. As I tried not to lose my shit Justin was kind and reassuring. Little did I know that due to how hard we were swinging he thought cables were going to come snapping off. He let me in on this terror after we got home. The other few times it happened, I was with different riders/racers. I am happy to note everyone lost their shit real quick. Lots of “GO TO YOUR HAPPY PLACE. FIND YOUR ZEN. I NEED TO LIGHT A JOINT. WE ARE GOING TO BE OKAY. WHO HAS XANAX?”

Like this could be a stage. I will take the rocky pro line over that 10,500 ft gap stop any day of the week.

Mammoth officially became my favorite enduro this year when they took out almost all the climbing for Sport and Beginner categories. Only one small traverse to catch a lift. WE LOVE YOU WHOEVER WAS IN CHARGE OF MAKING THAT DECISION.

Mammoth is crazy in every sense of the word. The racers who finished this race should be proud! 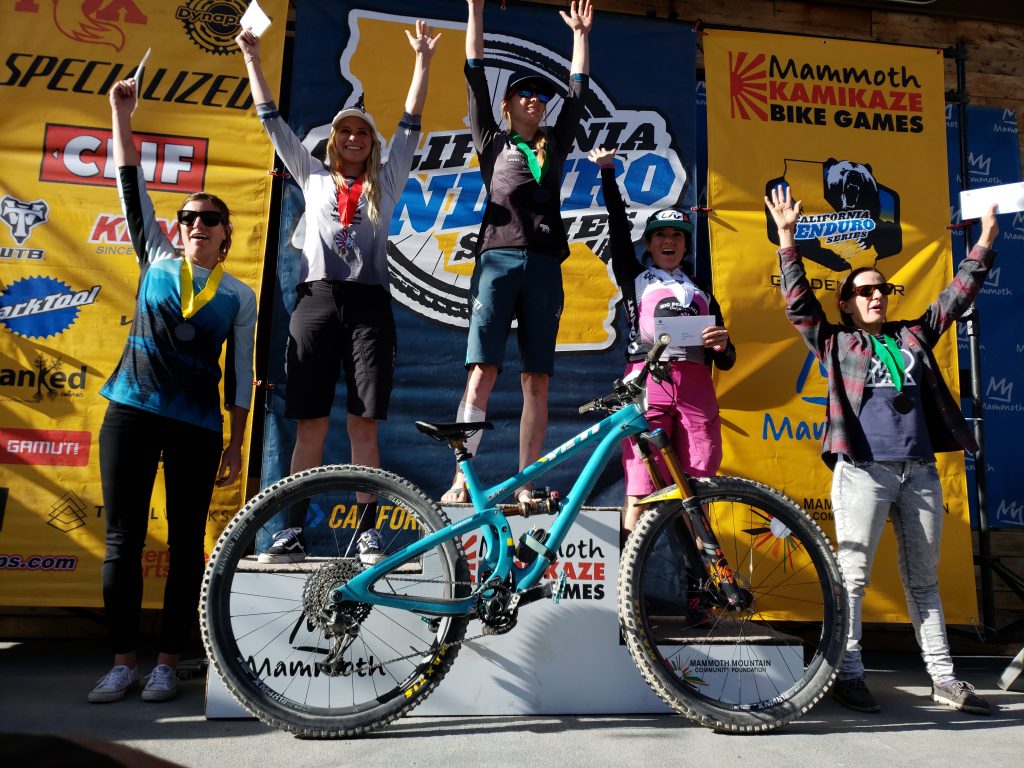 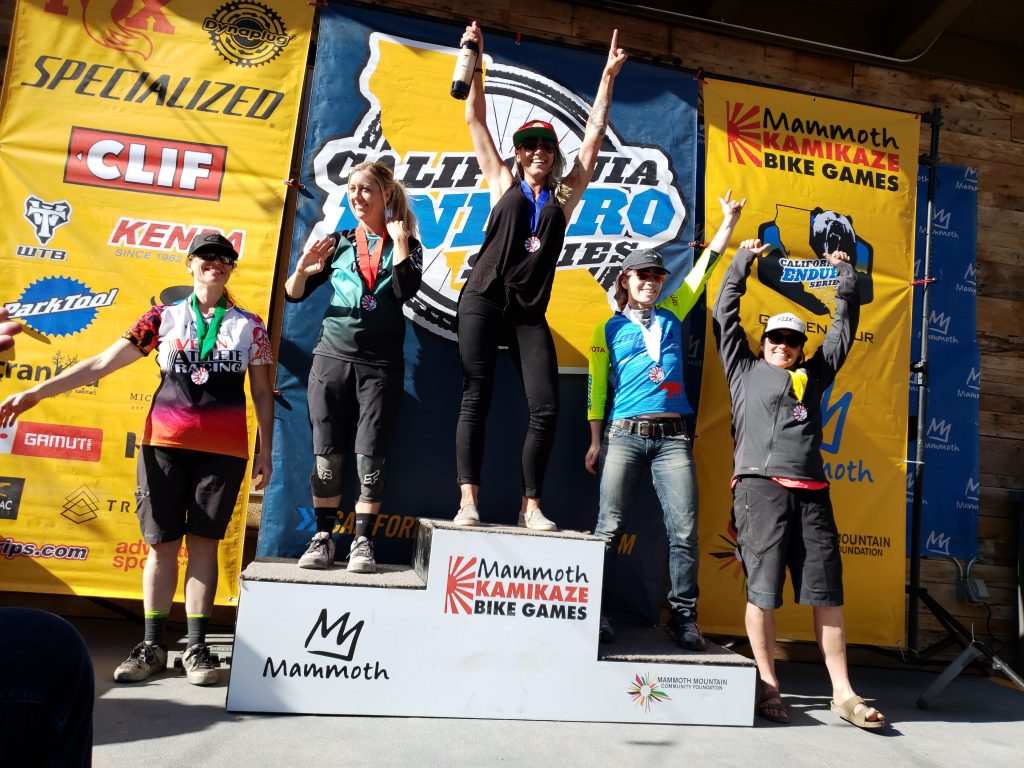 Every podium photo I was doing something like this. Also why am I still wearing my pads. 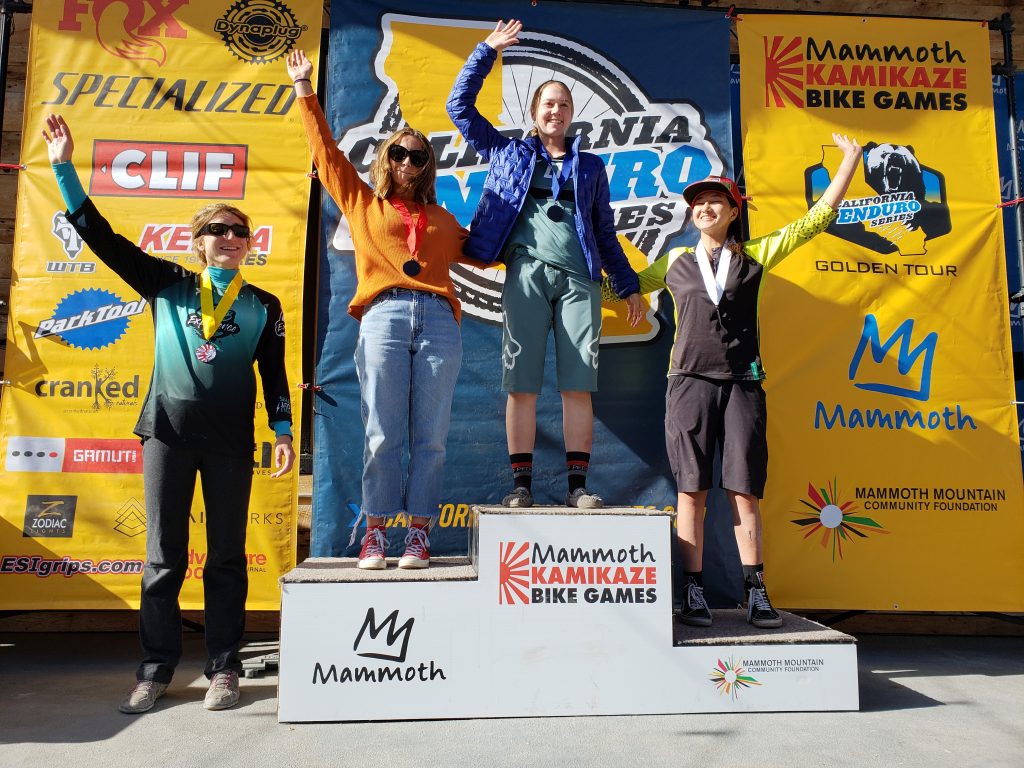 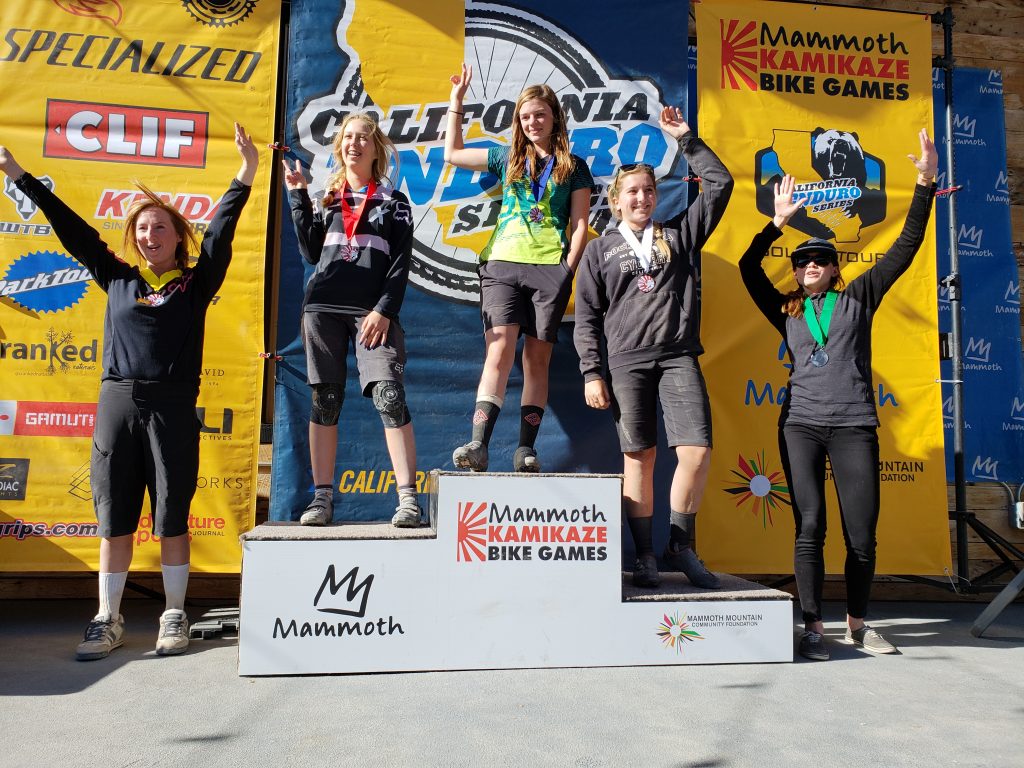 One more race to go in Ashland Oregon!