As soon as I arrived at Horsepower Ranch Friday afternoon there was a shuttle van of people getting loaded up. They were going to pre-ride stages 1&2. It took over an hour in traffic to drive across town to get to Stage 1. Once we were pedaling the climb up was pitchy. I could see that we’d have to do the same transfer for Stage 2. At that point I had no idea how much worse – longer, steeper, hotter – the transfer to Stage 2 was after the start of 1. I don’t even mind riding uphill for a long time, but this was intense.

A lot of the guys I rode up with stopped at the top but I don’t like to stop when I mountain bike. I dropped in and just told the gang to call out if they needed to pass. I was surprised I made it nearly 40% of the way down before folks came along. By my math, pretty much everyone rides 2.5x faster than me. I’m totally a slow poke at Enduro. But I do this sport to be a better technical rider, and just clearing hard sections and staying upright is a big win for me. I’m the queen of crashing. Last season I crashed on a transfer between two stages.

Stage one was rocky, but no real obstacles (no big drops, jumps, steep turns). The rocks were loose and the trail was raw. One guy who passed me flew off the trail and into a ditch. He was banged up pretty good. His seat stay was mangled. I helped him pull his bike out of the ditch and he rode out. Another guy behind us went over the bars really hard and knocked his head pretty good. As we loaded up the van to go back up to pre-ride stage two, I was just happy to be in one piece. It appeared the Ensenada Enduro was kicking off the season with a bang!

Stage 2 was intense. I haven’t ridden anything that challenging in a while so felt a little rusty and intimidated. Getting up there was another story. This transfer was long and horrible. AND I LIKE XC RACING. The middle-top on the actual stage was dusty loose and had some crazy steep corners. The bottom was fast and super flowy with some fun berms and jumps. The reward for getting through the top / middle section. After pre-riding this, I was not looking forward to it the next day during the race. It took us 4.5 hours to pre-ride two stages (of four). I was cooked. A bunch of the guys went to go pre-ride stage 3. However I was spent. I couldn’t imagine pedaling anymore. I’ve never ridden a CES stage blind before, but there is always a first for everything!

On race day, two MTB EXP team members agreed to shuttle the ladies up so we didn’t have to load our bikes in the trailers. That was super amazing of Donna to drive us. We got to ride in a nice truck, instead of a 35 year old school bus. One broke down going up the hill and those folks all had to get off and walk. 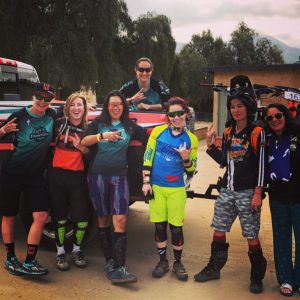 We rode up to the start of stage 1. The ladies try to organize ourselves in fastest to slowest, which usually works out pretty well. I cleared a rocky weird section at the bottom (the lines are tight and it’s easy to get thrown off with a pedal strike or an awkward front wheel shift) that I had to dab my way through on the pre-ride, so I was happy with that. We pedaled back to the truck to load up for stage 2. I was not looking forward to this one. I just kept telling myself once this one was over, it was (supposedly) smooth sailing. I didn’t really know, since I hadn’t pre-ridden either of them. Ignorance is bliss…

Pedaling up to stage 2 was a slog. My water bottle popped out and I didn’t notice. It was rocky with a lot of up and down sections for the first ⅔.  A guy rode by me and said, “Oh, I was gonna ask if you’re thirsty because you dropped your bottle back there, but I see you also have a hydration pack.” Another female rider picked it up for me and put it in her pack. Good thing I brought all my own supplies because the water refill station was decimated. We pedaled on and the trail gets really steep for awhile. I rode half of it in the pre-ride. However today I walked it all.  Even walking it was tiring. Near the top I stopped to take a picture. You could see forever. The range in both directions and the ocean to the West. It was beautiful. I plugged on. At the top, we didn’t have to wait long. We got our order organized and we took off. I just tried to stay focused. Ride the lines I practiced and just slip and slide through when things got steep. It actually wasn’t too bad the second time around! Two men passed me and they were totally sliding and out of control too. That made me feel better. Once I was through the steep loose switchbacks section, I kept telling myself the fun part was coming. I tried to pick up my speed to make up for the times I walked above. A guy rode up behind me and I told him to tell me when he wanted to pass. He said, “I’m on the chill, no worries.  I’m running the video, I’ll get you.” I rode down ahead the rest of the run. And he sent me the video afterwards! Thanks Mark!  As I rode through the finish, I saw MTB Experience race team member, Rachel, standing at the bottom. We high-fived and hugged, happy to be through that one. We cheered all the other women through the finish. Not an easy stage for beginner/newer racers. I was so proud and pumped for everyone. It is the highest high to finish a stage that you’re scared/intimidated by. It’s one of the addictive things about Enduro for me. 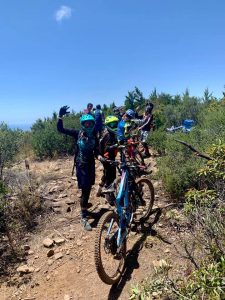 Once we regrouped, we headed back to the ranch. I quickly went to grab more gels and bars, refilled water, made another drink mix in my bottle and headed back out. I didn’t know where I was going because I hadn’t ridden these two stages, or even looked at the map. I took off to catch Rachel. I had to ride with her to know where to go!

The pedal up to stage 3 was long, but not too steep except for the very top. I heard the unmistakable sound of my rotors slamming into the brake pad badly each rotation. Crap, I thought, my rotor(s) are bent. It was making it arduous to climb. I didn’t want to stop. Rachel was already way ahead of me. I didn’t really know how to fix/ bend back rotors anyway. It’s not like I couldn’t ride. It was just slow. We got to the top and I saw my teammates/friends Jeff K. and Nick. I was so f’g happy to see them. I knew they’d know how to fix my bike. I yelled out to Jeff that my rotor was bent. He was like, no sweat! We can fix that! Oh my goodness, I was so grateful. He and Nick took a look and bent it back the best they could. I was rolling now without stopping.

Everyone told me the start to stage 3 was full gnar, starting at the top of the rock. However they took that away by the time the Sport crew rolled through. Moving the start up to the bottom of the rock instead. Rachel, bless her heart because she was probably sick of me asking her by now for all the course details, told me where there was one drop to be ready for but otherwise it was chill. This stage was super flowy and fast. I was fast but I had so much fun on that stage. I could have ridden that one multiple times! 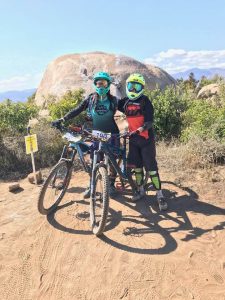 Riding back up to stage 4, some guys gave us some Doritos below the start of stage 4.  Have you tried the Dorito flavors in Mexico? They are WAY better than here. Powered by Doritos and the fact that this stage was the only thing standing between us and beers, we lined up. Other riders told me this stage was steep, but I had no idea what I was in for. The top wasn’t too steep, so all I could think of the whole time I was riding was is this the start of the steep?  No, no, is this the start of the steep…over and over again. I should have known, the start of the steep section was nearly halfway down, and it was OBVIOUS. Going into a sharp right turn my right knuckles slammed full force into a rock. It almost knocked me off, but I caught myself. Then I was faced with the first steep section.  Holy s&*t, this is steep! Not to mention loose dusty with a potpourri of sharp rocks. Ugh, I was kind of over it at this point. I told myself to just get through it. It wasn’t any worse than 2. Although, it kind of was for me because I had no idea what was coming next and the steep sections were long. After the last really steep section, the trail is exposed, and I could see the girls standing at the finish. My drive to finish picked up into high gear.  End it strong. Pedal hard, focus and I made it to the bottom. We waited for the other female riders to finish their runs. We rode back to the Ranch together beaming that we DID IT!

Pedaling back, I reflected on what an awesome experience this was. Riding in a cool new place.  Experiencing such amazing beauty and raw trails. Thank you Ensenada Bike Fest for a super fun Enduro! 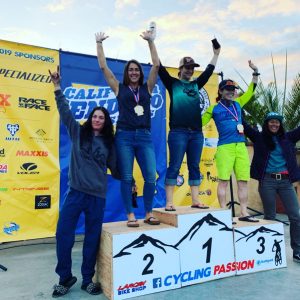 Editors note: Being I spent a semester studying in Guadalajara Mexico, I can concur the Doritos are better there.